A Note on Ayodhya Verdict 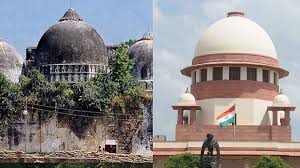 November 09, 2019, is a red-letter day in the history of the Indian judicial system. The day, which should be remembered for an end of a historical dispute over Babri mosque since 1949. The Supreme Court delivered its verdict on the long-running title suit at Ayodhya on appeals against the 2010 Allahabad High Court judgment.

Background of the issue :

 The Babri mosque was built in Ayodhya in 1528. Hindu groups claim it was built after demolishing a temple.  In 1853, the first recorded communal clashes over the site took place. In 1859, the British the administration put a fence around the site marking separate areas of worship for Hindus and Muslims, and it stood that way for nearly 90 years.  The property dispute went to court for the first time in 1949 after idols of Lord Ram were placed inside the mosque.  The mosque was demolished in 1992, which was followed by communal riots across India.  In April 2002, a 3-judge Lucknow bench of the Allahabad High Court began hearings on determining who owned the site. The court pronounced its verdict in 2010, where it divided the disputed portion into three parts, each going to Nirmohi Akhara, Ram Lalla, and the Sunni Central Waqf Board of Uttar Pradesh.  Ram Lalla i.e. Lord Ram himself was a party to the case as in 1989 a petition was filed in the court in which the petitioner argued that Lord Ram is a juristic person (a body recognized by the law as being entitled to rights and duties in the same way as a natural or human person).  Within months, Hindu groups and Muslim groups moved the Supreme Court challenging the High Court verdict. In 2011, the Supreme Court stayed the Allahabad High Court order.  After mediation proceedings by a Supreme Court-appointed three-member team failed to find an amicable solution to the dispute earlier this year, a five-judge constitution bench began day-to-day hearings on August 6, which went on for 40 days.

Key highlights from the judgment :

 The SC said that archaeological evidence cannot be brushed aside as conjecture and hypothesis.  Archaeological evidence supports that the Babri Masjid was not constructed on vacant land but on a Hindu structure.  However, the Archaeological Survey of India findings did not say whether a Hindu temple was demolished to construct a mosque.  The court also said that the destruction of the mosque in 1992 happened in breach of SC orders. The desecration of the mosque by placing idols in 1949 and its demolition was contrary to the law.  The SC has allotted the entire 2.77-acre disputed land for temple construction.  The Centre to formulate a scheme in three months to set up a board of trustees for the construction of a temple at the disputed structure.  The court has also ordered that suitable alternative land, measuring five acres, will be allotted for setting up a mosque.  The land will be given to the Sunni Waqf Board.  The SC ruled that the Allahabad high court judgment on the case in 2010 was wrong in dividing the disputed site into three parts.  The SC ruled that the Nirmohi Akhara suit was not maintainable and it has no she bait rights (priestly rights).  However, the court directed that in the Board of Trustees that will be set up, the Nirmohi Akhara should be given appropriate representation (Refer to the box).  The claim of the Shia Waqf Board against the Sunni Board to Babri Masjid was also dismissed.  The Supreme Court reiterated that Secularism is part of the basic structure of Indian Constitution.

Article 142 of the Indian Constitution :

 Article 142 of the Constitution allows the Supreme Court to pass any order necessary for doing complete justice in any cause or matter pending before it.  The Supreme Court exercised this Article to-  Direct that five-acre alternative land is allotted to set up a mosque.  Direct that the Nirmohi Akhara, whose suit had been dismissed, will also get representation in the trust that the Centre must set up.  In the past also, the court has used this Article to do justice in cases such as between Jaypee and homebuyers, Bhopal gas tragedy, etc.

What the Court said:

 Faith & belief of Hindus since prior to construction of the mosque and subsequent thereto has always been that Janmasthan of Lord Ram is the place where Babri mosque has been constructed which faith & belief has been proved by documentary and oral evidence. (From the addendum written by one of five judges)  On the balance of probabilities, there is clear evidence to indicate that the worship by Hindus in the outer courtyard continue unimpeded in spite of the setting up of a grill brick wall in 1857. Their possessions in the outer courtyard stand established together with the incidents attaching to their control over it.  The destruction of the mosque took place in breach of the order of status quo and an assurance given to this Court. The destruction of the mosque and the obliteration of an Islamic structure was an egregious violation of the rule of law.  The disputed site was government land in the revenue records. The fact that there lay a temple beneath the destroyed structure has been established by the Archeological Survey of India (ASI) and the underlying structure was not an Islamic structure.

As a conclusion, we can say that in paving the way for a Ram temple in Ayodhya, the Supreme Court prioritized communal harmony over all else and this is our Indian judicial system.