Overarching Needs on the Epidemic Act 1987 for Current Scenario 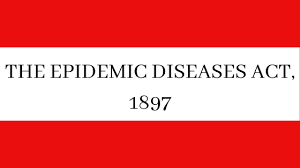 India is a country which is in the 21st century facing the dual burden of diseases nowadays. Due to these epidemic diseases, it is also a challenge to our health system to fight against these non-communicable diseases. There are very infectious diseases in India.

India contributes 30% of the disease’s burden across the world, due to these burdens of diseases it levies a burden on individuals, families, communities, and the nation on large. There are 1,584 diseases were reported in 2012 and these were the nonreported and unnoticed diseases. With due to the number of the rise in the number and on the spreading of these diseases it affected the travelling, globalization, and behaviour of the people, We know to fight against these unnatural diseases there should be proper care and caution and for that public health, intervention is divided into four categories namely as biological, behavioural, political, and structural. The first category is biological which is used for containing communicable diseases. The behavioural intervention is further used for bringing upon a change in the individual or society. The third one which is related to the political intervention is related to the policies related to the public health and the last one is the structural intervention which is a result of a political process or laws related to that.

These strategies are employed by the government of India to control the infectious diseases and they have a powerful control program which helps to focus on the diseases at a time.

Cost and nonintegrating is insufficient for the containment of the diseases. The second approach is based on investigation and control of the epidemic, it is a short-term containment and it is also inappropriate. A recent view was observed by our health system also concluded the failure and inadequacy of the system to fight against these infectious diseases. That’s why there is need of the epidemic disease act which came into force on 13 February 1897 for the national policies for the fight against these diseases, There are also other International organisation like WHO( World Health Organization). The epidemic Act not just helps the study to understand a particular disease but also gives a direction to fight against the pandemic

The Epidemic Disease act came into force in 1897 and this act enacted and helps to prevent or spreading of the epidemic diseases, to take precautions and proper safety precautions.

In times of Covid-19 pandemic, the Indian government took steps to avoid the mass spreading of the virus, The Colonial era act, all 123 years old and this act was placed due to the spreading of plague in Mumbai. As per we know plague is said to spread due to the rats and it also killed hundreds of people per week in Mumbai during that time. But British Government During that time used this act as a weapon to imprisoned the freedom fighter of the nation, the powers of the central government was also very limited. Four states Karnataka, Maharashtra, Delhi and Kerala issued management for the COVID-19 regulations,2020 and this to regulate the and to stop all the construction work, closing of industries, shops, factories, and also shutting down of gym, night clubs and bazaars also which is also a negative symbol for the economy of the country and we all know that India is not a developed country it is still developing and fall in the economy comes with great harm due to the Covid-19 pandemic and India is in a controlling situation where it fights against COVID-19 bravely in the world.

And according to section 3 of this act whoever disobeys the rules of this act made by the government shall be punished with section 188 of the IPC, this section says punishment for disobeying an order promulgated by a public servant and this is also punished with simple imprisonment and a fine amount to 200.but if this disobedience results in the public danger of causes riot or affray then it is punished with simple imprisonment for a term which may extend to six months and an amount of fine up to 1000. It also required in section 188 of the IPC that intention is not necessary only mere knowledge of the fact is required, It is also a bailable and a cognisable offence, and the complaint must be filed by the public officer under section 195 of the Cr.PC. In case of Raj Mangal Ram v State of Bihar[1]. Certain directions were issued by the district magistrate of Muzaffarpur for implementation of the Anti Kalazar scheme.

In the case of J. Choudhary v The State[2], Does the question arise that the refusal of a doctor to get himself vaccinated against cholera in violation of section 3 of the epidemic act? The Orissa high court said that the intention of the doctor was irrelevant, there was no sign of obedience and he was punished under this act.

Section 4 says the protection of public servants from legal action while performing their duty in a good faith, In case of Lall Mistry v R.T Greer[3].it was held by the Calcutta High court that omission to pay compensation as regulation passed under this act is are not entitled to protection under this section.

IPC protects this act by certain sections mentioned in the Indian Penal Code Like section 269 of IPC says Negligent act which may result in the spread of infection or any disease which is threatening for human life and it also punishable with imprisonment for six months and a fine or with both.

According to section 270 which says that whoever malignantly doing something which may result in the spreading of some dangerous disease which is endangering human life is punishable with two years imprisonment or with fine or with both.

The present scenario of the epidemic act

As we know due to the Covid-19 pandemics, the whole world is panic and the doctors and the members of health care services are now targeted and also attacked by the miscreants and due to this they’re not able to perform their duties, In this pandemic, they’re working day and night without even proper care and precaution for themselves to save the human lives and by treating corona patients they are also infected by this virus and which may also amount to the death of the service providers. In many cases, they also become the victim of harassment, with the constant violence and injuries they are not able to perform their duties with confidence and this may also become a negative factor for the country because in this crucial time the major requirement is free from fear and confident health services.

Several states also made laws to protect the doctors and medical staff members but somehow it was not helpful to protect the interest of the medical staff. We’ve also observed the violence which was created by the people while they were doing certain procedure regarding Covid-19 tests, but days after days there was no positive sign for the health workers in this country and we need strict laws and regulations for the protection of their rights and importance in the country.

The Main loophole of the act is that there is not a strict punishment and everyone is taking it seriously and they are breaking laws and regulations of this act and all we need is to be a deterrence among people before they try to break the law.

With this situation, the Union Cabinet held a meeting on 22 April 2020 approved promulgation of the promulgation of an ordinance to amend the Epidemic Diseases Act, 1897 to protect the health care services and the spread resident of the country also give his assent to the ordinance and the motive of the change is to control the pandemic so it can be regulated. With the view of increasing attacks on health care workers and staff, it was so necessary nowadays. Violence defined in this section as harassment and physical injury and also damage to the property. Health personnel includes doctor, nurses, paramedical workers and any other person who is empowered by this act to prevent the outbreak of the disease and any person declared by the state government by notification in the official gazette.

The amendment and the violence of this act are cognizable or non-bailable and the commission of the act or such violence shall be punished with imprisonment for a term of three months to five years and a fine of Rs. 50,000 -2,00,000.

In case of grievous hurt or then the imprisonment would be of seven years and a fine of Rs.1,00,000/- to 5,00,000/-. And also amount to the compensation to the victim and twice market value for damage the property.

During this Covid-19 pandemic we know India is in much better condition than any other country and for following the rules they need for the amendment was necessary and its central government has given a role to the state governments to take safety measures which may help to prevent of spread thereof. Inspection on vessels and sanitization of railways, road public places, metro are certain things which we should protect.

The Health workers are playing the role of a real soldier of this country they’re fighting against these epidemicson their own risk to ensure the safety of others. They deserve the highest respect nowadays and individually we encourage themselves for their efforts towards the country. It is hoped that this ordinance will help to maintain the impact on Covid-19 pandemic, today world is in a position where it needs support and energy to get over from this pandemic.

It is also observed by the professionals they need and the benefits of this activity around the state to bring a change in the public health and also for the health service providers so that they can freely do their work and with confidence.

With the new ordinance, it is very important to notice that people are following the laws which are mentioned in the act and they have a fear of punishment in their mind which helps health workers to work very smoothly without fear, and due to corona pandemic they are still working day and night without even thinking about their family and loved ones, and it is also a responsibility of every single citizen to respect the real warriors of this time.