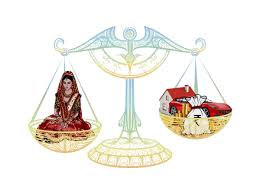 Marriage in India is filled with traditions and cultural beliefs. Practices are passed down by word of mouth and in some cases, re-interpreted with changing times. There is, one custom that stubbornly resists changing the dowry system. The dowry system in India refers to goods, cash, movable property that the bride’s family gives to the bridegroom or his relatives as a condition of the marriage.

The Dowry Prohibition Act 1961 defines dowry: “Dowry means any property or valuable security given or agreed to be given either directly or indirectly – (a) by one party in a marriage to the other party in marriage; or (b) by the parents of either party to a marriage or by any other person to either party to a marriage or to any other persons at or before or after the marriage as consideration for the marriage of the said parties, but does not include dower or mahr in the case of persons to whom the Muslim Personal law applies.”

A court judgment clarifies the legal definition of dowry as

“Dowry” in the sense of the expression contemplated by Dowry Prohibition Act is a demand for property or valuable security having an inextricable nexus with the marriage, i.e., it is a consideration from the side of the bride’s parents or relatives to the groom or his parents and/or guardian for the agreement to wed the bride-to-be.

In India, the dowry system was started from medieval times when a gift in cash or something of some kind was given to a bride by her family to maintain her independence even after marriage. Later, it became the only legal way to get married, with the British making the practice of dowry mandatory. In present India, with its higher economic growth, it is now encouraging higher bride prices among all socioeconomic statuses. But the rising bride price has brought with it an increase in violence against women.

Dowry violence is usually committed by the husband or his family in a desire to extract a higher dowry from the bride’s family. The dowry price paid at the time of marriage may be significant, but the greed of husbands and his family can grow after marriage, which results in physical, mental, or sexual violence against the bride.

A few months ago there was news regarding the starvation death of a 27-year-old woman from Kerala. The postmortem report revealed that the woman was reduced to a bag of bones and weighed twenty kgs hardly. In-laws family admitted to having fed her only rice and sugar soaked in water. The girl’s family alleged that this was because their demand for the dowry of rupees 2lakhs was not met. Thus, despite having two children her suffering continued to be intense. She was confined in the house which had barriers all around to prevent the neighbors from getting known of the happenings inside. The case once again highlights the level of our depravity, where life is snuffed out by none other than the spouse or in-laws, for non-fulfillment of monetary demands.

In India, it was reported that 20 women die every day as a result of dowry harassment – either murdered or compelled to commit suicide. National Crime Bureau of India has recently recorded nearly 7000 dowry linked deaths. Dowry deaths rose from about 19 per day to 21 per day in 15 years.

Asking for dowry has been banned in India since 1961, the ban has become a challenge to enforce. An amendment in 1986 mandated that any death or violence within the first seven years of marriage would be tried as related to dowry. Actually many cases of dowry violence go unreported.

Although Indian laws against dowry have been in effect for decades, they have been largely said to be ineffective. The practice of dowry deaths continues to take place unchecked around India, which further added to concerns of enforcement.

The Indian criminal laws were amended to include dowry as a punishable offense. Section 304B was added to the “Indian Penal Code, 1860” (“IPC”), which made dowry death an offense punishable with a minimum sentence of imprisonment for 7 years and maximum imprisonment for life. It provided that if the death of a woman is caused by burns or bodily injury or occurs in suspicious circumstances within 7 years of her marriage, and there’s evidence to show that before her death, she was subjected to cruelty or harassment by her husband or his family regarding the demand for dowry, then the husband or the member of his family shall be deemed to have caused her death.

Disadvantages of Dowry System in India

Many women are afraid to entail their husbands in a dowry crime because Indian society is viewed as having conditioned women to expect abuse and in some sense eventually, tolerate it. While the laws give powers, they are not efficaciously enforced by the police or by courts. It can take about 10 years for a case to go to court and even once in court, husbands and his family end up getting away with blackmail or sometimes murder because the women and their families cannot prove ‘beyond reasonable doubt’ that they are the victims of such crimes, as there are rarely any outside witnesses.

Dowry Death – In a case of ‘dowry death’ (Sec.304-B IPC) on facts and in the circumstances, sentence deserves to be reduced to period of imprisonment undergone (eight years).

Dowry Death – The expression ‘soon before her death’ has to be given its due meaning as the legislature has not specified any time which would be the period prior to death ,that would attract the provisions of Section 304-B I.P.C.

Dowry Death – Where the evidence of the parents of the deceased does not disclose demand for dowry and ‘dowry death’ of the deceased, conviction under Sec.304 –B IPC not sustainable.

Dowry Death – Where wife is driven to the extreame step of suicide it would be reasonable to assume an active role of her husband,rather than leaving it to the discretion of court.

Dowry Death – The deceased died within seven years of her marriage and there was a charge under Section 498-A IPC, Section 304-B IPC would stand attracted. It may be noted that under Section 304-B IPC, it is not necessary to establish a homicidal death for proving the offence of ‘dowry death’- It is sufficient if the death of the women is otherwise than under normal circumstances-Any accidental death occurring otherwise than under normal circumstances would also come within its ambit.