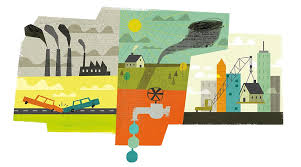 This study presents a quantitative assessment of the environmental consequences of urbanization in general and city bigness in particular in the context of the process of economic development. Urbanization refers to a general increase in population and the amount of industrialization of a settlement. It symbolizes the movement of people from rural to urban areas. Assam, the Northeastern state of India, has been witnessing the increased movement of people from rural areas to urban areas in recent years. This research paper is an attempt to understand the causes and consequences of rural to urban migration in Assam. Most of the high productive activities are located in urban areas, so many people of rural areas migrate to urban areas in search of jobs. Although it is impossible to restrict urbanization it has to be ensured that urbanization proceeds in the right path causing minimum impact on the environment. Thus, to stem down the rate of migration, functional amenities such as pipe-borne water, electricity facilities should be provided in the rural areas also. Better educational facilities should be made available in rural areas.

Sustainability is a broad discipline, giving students and graduates insights into most aspects of the human world from business to technology to the environment and the social sciences. The core skills with which graduates leave college or university are highly sought after, especially in a modern world looking to drastically reduce carbon emissions and discover and develop the technologies of the future. Sustainability draws on politics, economics and, philosophy, and other social sciences as well as the hard sciences. The idea of sustainability stems from the concept of sustainable development which became common language at the World’s first Earth Summit in Rio in 1992. The definition of “sustainability” is the study of how natural systems function, remain diverse, and produce everything it needs for the ecology to remain in balance. It also acknowledges that human civilization takes resources to sustain our modern way of life

Urban growth has caused many environmental problems, especially urban sprawl which leads to loss of green open spaces and an increase in traffic and energy consumption. As a result, the compact city concept has been put forward as a form of sustainable urban development. Air pollution is one of the key environmental problems associated with urbanization. Satterthwaite says: “The guide also considers links between poverty and pollution in urban areas, i.e. where and how do low-income women, men, and children get higher exposure, and the impacts on their health, incomes, assets, and livelihoods.”.[1]

With 64 percent of people living in rural areas, Assam is one of the least urbanized states in India. Although relatively less urbanized than the many states of India, Assam has experienced an increased movement of people from rural areas to urban areas in recent years. This paper seeks to address and analyses the major causes behind rural to urban migration in Assam. Rural-Urban migration is a double-edged problem affecting the rural community as well as the destination urban areas. Unemployment, inadequate social amenities in the rural communities, negative attitudes associated with agriculture, and the recurring floods are the major factors influencing rural to urban migration in Assam. The paper also tries to see the socio-economic impact go rural to urban migration.

Urbanization is a process that leads to the growth of cities due to industrialization and economic development, and that leads to urban- specific changes in specialization, labor division, and human behaviors. The population is growing at the rate of about 17 million annually which means a staggering 45,000 births per day and 31 births per minute. If the current trend continues, by the year 2050, India would have 1620 million populations. Due to uncontrolled urbanization in India, environmental degradation has been occurring very rapidly and causing many problems like shortages of housing, worsening water quality, excessive air pollution, noise, dust and heat, and the problems of disposal of solid wastes and hazardous wastes.

Probably most of the major environmental problems of the next century will result from the continuation and sharpening of existing problems that currently do not receive enough political attention. The problems are not necessarily noticed in many countries or then nothing is done even the situation has been detected. The most emerging issues are climate change, freshwater scarcity, deforestation, and freshwater pollution, and population growth. These problems are very complex and their interactions are hard to define. It is very important to examine problems through the social-economic-cultural system. Even the interconnections between environmental problems are now better known, we still lack exact information on how the issues are linked, to what degree they interact, and what are the most effective measures. One problem is to integrate land- and water use planning to provide food and water security.

Certain special factors are responsible for such a high rate of growth of the urban population in Assam. The following are some of those special factors:

Immigration: Large-scale immigration of population from the neighboring countries like Bangladesh, erstwhile East Pakistan, Nepal, etc. causes a high rate of growth of urban population in Assam. Such immigration was very high during 1961-71 and even in recent times, such immigration is continuing.

Guwahati since 1972 has been the capital of the reorganized state of Assam. Before 1972 it was never a state headquarter in modern times except for a brief period, though in ancient times the area was the location of various pre-historic urban settlements. As a headquarter of the state administration, the city became the central place of the state concerning various Government services, more intensive linkage with its hinterland, and better linked in terms of transport and communication. During the British period was the establishment of the cantonment at Paltan bazaar, opening new lines of transport and communication and improvement of old ones within the town which were added to the city. During the decade 1931-1951, the city recorded an increase of population of 35.78 percent i.e. from 21797 (1931) to 295698 (1941) from 1951 to 1961 the population increase was significant, from 43615(1951) to 10072(1961). With the increasing and expansion of population and their activities, the land use pattern has been changing day by day and as a result of this, the natural resources are decreasing day by day. Table 1 shows the land use pattern of the city and it also shows how natural resources are degrading day by day by human activities from 1977 to 2007.

From this, we can conclude that about the growth behavior two distinct phases namely, pre-independence marked by stagnancy and slow growth and post-independence by medium and high growth with an exception during 1971-91 when the growth is hampered due to the social unrest that prevailed in the whole of Assam. Guwahati has maintained its dominance and lead as a prominent town with both high centralities score high population growth rate. The inequalities of urbanization among the districts of Assam may be addressed by giving impetus for balanced infrastructural development in small and medium towns of Assam. Thus from the above analysis, it is revealed that the size of the urban population of these important towns in Assam has been increasing at a rapid pace in consonance with the growing trend of urbanization in the State. The present study revealed that the population in the city has been rapidly increased after the shifting of capital from Shillong to Guwahati. Due to rapid population growth and urbanization, Illegal settlements, industries, and excessive growth of invasive species the natural resources have been degrading gradually. As a result, hills and wetlands have encroached. Hence, with a depleting green cover on the hilltops and hill slopes, shrinking wetlands, and low lying areas due to human interference and encroachment, the environment in the city is witnessing and experiencing unprecedented pollution.

Lastly, to protect the natural resources from habitat loss, fragmentation, and alteration the following recommendations are given: