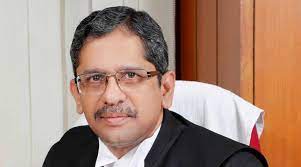 Justice Ramana has been a part of 403 judgements till the present date and 157 judgements with more than 110 citations have already been authored by him.

Justice Ramana was a first-generation lawyer born in an agricultural family on August 27, 1957. He hails from Ponnavaram village, Krishna district in Andhra Pradesh. Both of his parents that is his father Ganapathi Rao and his mother Sarojni Devi were agriculturalists in the Krishna district of Andhra Pradesh. Justice Ramana holds BSc and BL degrees.

He was a student leader during the Emergency in 1975 and lost a year because of activism. Before choosing to become an advocate he had briefly experimented in the field of journalism and worked as a journalist in a leading regional Telugu newspaper for two years.

During his practice years, he had served as an Additional Advocate General for the State of Andhra Pradesh.

Justice Ramana was made Patron-in- chief of the National Legal Services Authority of India (NALSA) which was set up on November 9, 1995, and NALSA provides free legal aid to eligible candidates and organizes LokAdalats for the speedy resolution of cases.

After that Justice Ramana was appointed as a permanent judge of the Andhra Pradesh High Court on June 27, 2000.

Further, he was elevated as Chief Justice of Delhi High Court on September 2, 2013, and then after that as a judge of the Supreme Court on February 17, 2014.

The E- LokAdalat of Rajasthan State Legal Services Authority (RSLSA) was also made under the guidance of Justice Ramana being the chairman of NALSA and because of that RSLSA took up more than 45,000 cases and out of these cases about 33, 476 cases were settled.

He is a member of the General Council of the National Law School of Indian University (NLSIU) Bengaluru.

He is also the chairman of the Library Committee in Indian Law Institute, Delhi and also the President of Andhra Pradesh Judicial Academy.

In March 2021, Justice SA Bobde recommended him as his successor to the post of CJI. Ramana was appointed as the 48th CJI by the President of India.

As a judge of the Supreme Court, Justice Ramana has been a part of several landmark judgements which included the following :

Justice Ramana also faced false, motivated and baseless allegations from YS Jaganmohan Reddy, the chief minister of Andhra Pradesh who faces trial investigated by the CBI and the ED in a dozen of cases. The current Chief Justice of India, Justice SA Bobde had recently dismissed the complaint of the Andhra Pradesh chief minister against justice Ramana before recommending his name as his successor.

Last but not the least, the new chief justice of India, Justice Ramana will face many challenges as the Covid 19 pandemic had disrupted the physical hearings. As said by him his primary objective along with providing easy access to justice also would be to improve the judicial infrastructure by making a nodal agency called the ‘ National Judicial Infrastructure Corporation’.