DEFAMATION AND ITS DEFENSES BY- TEJASWINI SINGH 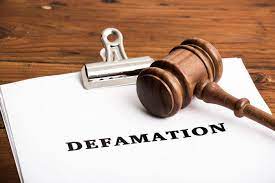 Defamation is the act of communicating false statements about a person that harms the reputation of that person.

“History of defamation can be traced in Roman law and German law. Abusive chants were capitally punishable in Roman. In early English and German law, insults were punished by cutting out the tongue. In the late 18th century, the only imputation of crime or social disease or casting aspersions on professional competence constituted slander in England. The enactment of the Slander of Women Act added imputation of unchastely illegal. French defamation laws were very severe. Conspicuous retraction of libellous matter in the newspaper was severely punishable and only truth is allowed as a defence when the publication is related to public persons. In Italy, defamation is criminally punishable and truth seldom excuses defamation.[1]”

Defamation is an injury to a person’s reputation using a false statement projected as facts. There are two categorize of defamation:

LIBEL – A defamation that is in written form, it is addressed to the eyes. The defamatory statement is made in some permanent and visible form, such as writing, printing, pictures, and effigies. It is an actionable tort as well as a criminal offence. It is actionable per se (in itself) i.e., without proof of actual damage.

SLANDER–A defamation through a spoken form, it is addressed to the ears. The defamatory statement is made by spoken words or some other transitory form, whether visible or audible, such as gestures, hissing, or other things. It is a civil injury only and not a criminal offence except in certain cases. It is actionable only on proof of actual damage.

While defamation needs to be a false statement, the claim on the person defamed should be false. A true statement in its entirety can be never used to create a liability for defamation but, private and personal information shared or published could give rise to other liabilities under a different law.

There are certain elements of defamation-

LAWS OF DEFAMATION IN INDIA

UNDER THE CIVIL LAW

“In civil law, defamation is punishable under the Law of Torts by punishing in the form of damages to be awarded to the claimant.”[2]The statements made need to be false and they must be made without the consent of the alleged defamed person. Monetary compensation can be claimed from the defendant for defamation.

There are certain requirements for a successful defamation suit. They are-

UNDER THE CRIMINAL LAW

“It is nothing but defamation for which simple imprisonment may be awarded. Under a criminal suit, the intention to defame is necessary. The allegation should be made with malice intent to defame another or at least the knowledge that the publication is likely to defame another is essential. It has to be proved beyond reasonable doubt that the act was being done to lower the reputation of another.

Truth If a statement is true, then this will form a complete defence. It should be noted that the burden of proof for showing that a statement is true rests with the defendant. The defendant does not have to show that every single characteristic of the statement made is true, merely that it is substantially true. An honest opinion will not be considered defamation.

It is a defence to publishing defamatory material if the publisher can prove that the: the material was an expression of their own, their employee or agent, or of another person other than their own, rather than a statement of fact.

Publishers can also make out a defence if they can prove the material was or was a part of, and report on proceedings publicly held in a parliament, court, tribunal, government body, or before the Ombudsman.

A public document is one of the following:

Privilege is a complete defence for the publisher. The privilege may be obtained through the consent of the person who may be defamed by the material. However, there also are privileges created by law, which are based on a policy that holds that good resulting from allowing publishing of potentially defamatory material outweighs the harm that may result. Absolute privilege, also called immunity, is granted to a person because his position or status requires that he be able to act in that position without fear of civil action.

The people who hold absolute privilege are-

The right to reputation, which is recognized as a dimension of the right to privacy, a fundamental right under Article 21 of the Constitution of India, is what is protected by the law of defamation. Reputation is how a person is perceived by others, i.e. the opinion of the community against a person. The Supreme Court in a landmark judgment held that an individual has a right to protect his reputation from being unfairly harmed and such protection of reputation needs to exist not only against falsehood but also certain truths. Intention to cause harm to the reputation of a person is sine qua non of the offence of defamation. Reputation is a cherished constituent of like and is not restricted in time. The importance of reputation can be traced back to the Bhagwat Gita, Holy Quran and Holy Bible. While the interpretation differs and is stated in different contexts, yet the importance of reputation has been stressed upon.