THE NINTH SCHEDULE AND JUDICIAL REVIEW – BY YAGYA BHARADWAJ 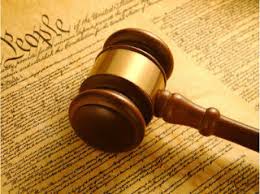 INTRODUCTION The Constitution of India came into effect on 26th January 1950. It is the supreme law of India and lays down the basic framework of the functioning of the State with relation to the citizens. Since its commencement, it has been amended several times, and recently, the 104th amendment was made to the Constitution. Naturally, several of these amendments were introduced after being debated over, and some are still being debated. The First Amendment introduced the Ninth Schedule in 1951. It contains a list of central and state laws which cannot be challenged in courts. But, since its introduction, many evolutions took place in the Constitution, also changing the way the Schedule works. This paper seeks to give a brief insight into the history and evolution of the Ninth Schedule with reference to Judicial Review.

The Ninth Schedule became a part of the Indian Constitution through the First amendment in 1951. It was introduced by the Nehru Government as a result of land reforms laws and the abolition of the Zamindari system. Land reforms were needed to protect the weaker section of the society, disperse the concentration of land from a few hands, and promote the principle of equality enshrined in the Constitution. Since 1951, several laws were added to the Ninth Schedule through amendments that were made to the Indian Constitution over the past seven decades, and presently, 284 Acts are included in it.

Article 31 of the Indian Constitution gave the people of India the right to hold and dispose of their property.

“Art 31- Compulsory acquisition of property – (1) No person shall be deprived of his property save by authority of law.

(2) No property shall be compulsorily acquired or requisitioned save for a public purpose and save by authority of a law which provides for acquisition of the property for an amount which shall be fixed by such law, and no such law be called in question in any court on the ground that the amount so fixed is not adequate……”[1]

The right to property was part of the fundamental rights guaranteed to all citizens under Article 19 (1) (f) and Article 31, which was removed by the 44th amendment in 1978. Now it is a constitutional right under Article 300A of the Constitution. There are three essential elements when it comes to government acquiring the private property of any individual: 1. It should be for the public purpose 2. By the authorization of law 3. There should be compensation given to the owner of the property

In 1951, along with the Ninth Schedule, Article 31 (A) and 31 (B) were also inserted in the Constitution through the First Amendment, which had added 13 laws to the Schedule. Article 31 A- “Saving of laws providing for the acquisition of estates, etc.- (1)Notwithstanding anything in the foregoing provisions of this Part, no law providing for the acquisition by the State of any estate or of any rights therein or for the extinguishment or modification of any such rights shall be deemed to be void on the ground that it is inconsistent with, or takes away or abridges any of the rights conferred by, any provisions of this Part.”[2]

According to this, the government has the power to acquire the property of the people and by doing so, the fundamental rights mentioned in Article 14 and 19 of the Indian Constitution will not be violated. In other words, Article 31(A)became immune to Part III of the Constitution that provides for fundamental rights, which cannot be taken away from an individual.

Subsequently, Article 31 (B) was also inserted. It states- “Validation of certain Acts and Regulations.- Without prejudice to the generality of the provisions contained in article 31A, none of the Acts and Regulations specified in the Ninth Schedule nor any of the provisions thereof shall be deemed to be void, or ever to have become void, on the ground that such Act, Regulation or provision is inconsistent with, or takes away or abridges any of the rights conferred by, any provisions of this Part, and notwithstanding any judgment, decree or order of any court or tribunal to the contrary, each of the said Acts and Regulations shall, subject to the power of any competent Legislature to repeal or amend it, continue in force.”[3]

According to this, none of the Acts and Regulations that are specifically stated in the Ninth Schedule can be declared void only on the ground that they are inconsistent with, or violative of the fundamental rights mentioned in Part III of the Constitution. Another notable thing about 31B is that it was to have retrospective effect, which means that if a particular statute is declared unconstitutional by a court, and later included in the Ninth Schedule, it would be regarded as having been a part of the Schedule since its commencement.

The immunity it got from having to confirm the fundamental rights was challenged in the Waman Rao Case. Here the basic structure doctrine comes into the picture because it has been established by the Judiciary time and again that the basic structure of the Constitution cannot be tampered with.

In this case, the Supreme Court held that the amendments that were made to the Constitution pertaining to the Ninth Schedule before April 24, 1973 (until the Kesavananda Bharati judgment[4]), are valid and constitutional. Further, the amendments regarding the Schedule that were introduced after the above-stated date, are open to scrutiny on the grounds that they violate the basic structure of the Constitution, and hence, are beyond the constituent power of the Parliament. Meaning that they do not get a pass to violate fundamental rights, and are subject to limitations, like any other valid law.

The term ‘Judicial review’ refers to a process wherein the actions of the executive and the legislature are subject to review, and possible invalidation by the judiciary[5]. India adopted the provision of judicial review from the Constitution of the United States of America. In the historic case of Marbury v. Madison, Justice Marshall observed, “the constitution is either superior paramount law, unchangeable by ordinary means or it is on a level with ordinary legislative acts and like other acts are alterable when the legislature shall please to alter it… Certainly all those who framed written constitutions contemplate them as forming the fundamental and paramount law of the nation consequently the theory of every such government must be that an act of the legislature repugnant to the constitution is void…. It is emphatically the province and duty of the judicial department to say what the law is”[6].

In the Indian Constitution, judicial review is dealt with under Article 13. Article 13 – “(1) All laws in force in the territory of India immediately before the commencement of this Constitution, in so far as they are inconsistent with the provisions of this Part, shall, to the extent of such inconsistency, be void. (2) The State shall not make any law which takes away or abridges the rights conferred by this Part and any law made in contravention of this clause shall, to the extent of the contravention, be void.” (3) In this article, unless the context otherwise requires,—

(a) “law” includes any Ordinance, order, bye-law, rule, regulation, notification, custom or usage having in the territory of India the force of law;

(b) “laws in force” includes laws passed or made by a Legislature or other competent authority in the territory of India before the commencement of this Constitution and not previously repealed, notwithstanding that any such law or any part thereof may not be then in operation either at all or in particular areas.

(4) Nothing in this article shall apply to any amendment of this Constitution made under article 368”.[7]

The 1st clause talks about the laws that were in existence before the Constitution came into force i.e., before January 26, 1950. Any part(s) of those laws that are inconsistent with Part III of the Constitution is, to the extent to which they are in contravention of fundamental rights, be void (Doctrine of Severability).

The 2nd clause acts as a prevention against the State making any law that contravenes with the rights guaranteed by Part III of the Constitution, and any such law, if made, shall be void to the extent of their inconsistency.

In the 3rd clause, “law” and “law in force” are defined clearly.

The 4th clause refers to the power of the Parliament to amend laws under Article 368, meaning that the provisions of Article 13 do not apply to amendments made in Article 368, and are not open to be challenged on the ground that they do not confirm to Article 13 of the Constitution.

This is where the Doctrine of Basic Structure comes in.

The Doctrine of Basic Structure states that the basic, and essential features of the Constitution cannot be tampered with, and any amendment that violates the basic structure of the Indian Constitution shall be void to the extent of their violation of the same. The idea behind this rule is the protection of democracy and the fundamental rights guaranteed to the people by the Constitution.

This case came into light as a result of the reference made by a 5-judge Constitution Bench in 1999 after the Gudalur Janmam Estates (Abolition and Conversion into Ryotwari) Act, 1969 was struck down by the Supreme Court in Balmadies Plantations Ltd. v.State of Tamil Nadu[11].

In its referral, the Constitutional bench noted that according to the Waman Rao Case, the amendments made to the Constitution after the Kesavananda Bharti case by inserting new laws into the Ninth Schedule, can be challenged on the ground that they are violative of the fundamental rights guaranteed in Articles 14, 19 and 31.

Therefore, the referral asked the 9-judge bench to relook into the Waman Rao judgment and determine whether it needs to be overruled or not.

Since the Ninth Schedule was introduced, various legislations found their ways into the safe place that was immune from being subjected to judicial review, even if those laws violated the fundamental rights. Another notable point is that there were laws in that Schedule that had nothing to do with land or agrarian reforms. So, the claim that the Schedule was added to protect the weaker section of the society and bring positive changes with respect to right to equality was not entirely true. It was amply clear that the legislature in the guise of the Ninth Schedule was trying to escape not only the limitations imposed by the basic structure doctrine but also bypass the judicial review of legislation that were manifestly ultra vires to the Constitution.

In the ruling of the case, the Court unanimously held that the Legislature could not be permitted to escape the scrutiny of the Basic Structure doctrine by trying to find ways to get around it. The basic structure doctrine is the very essence of the Constitution and any acts, rules and regulations that violate its essence cannot be allowed to continue in this brazen manner[12].

The court also made the following observations:

Conclusively, Chief Justice Sabharwal, who led the 9-Judge Bench in the case, upheld the validity of the Basic Structure Doctrine, and also laid down that the Judiciary has the power to review any law that seems to be violative of the basic structure of the Indian Constitution.

After analyzing the facts underlying the insertion of Ninth Schedule through the First amendment to the Indian Constitution, and approaching it with respect to judicial review, that forms a big and essential part of our democracy and also the basic structure of the Constitution, we can establish that a democracy is dependent on the principle of checks and balances, fundamental rights, and above all, the supremacy of the Constitution.

In various case laws over the last 7 decades, the Court made different observations and gave varied rulings, which led to the evolution of the Basic Structure doctrine, and reaffirmation of the rule of law and basic principle of equality and justice.